vinyl gloves’ be or not to be

Visiting my locally grocery store. Waiting for help and happen to glance over the count 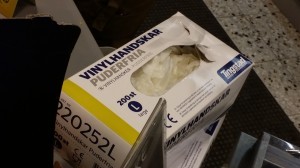 er where they, among other things, serves hot dogs, selling lottery tickets, stamps and operate postal services. There is a box of powder free Vinyl Gloves. I know they still exists, but yet Im amazed. Even today, in our modern times, with other options, is still a market for vinyl gloves. Now you maybe wondering what so dangerous with vinyl gloves? Research has shown that many vinyl gloves contain high levels of endocrine disrupting substances that can be transferred to the person who wears the gloves, and to the products they handle. It could be food, kids, cleaning and food preparation, to name a few. In several brands up to half of the vinyl glove content  was phthalates. If you need to use gloves you can choose gloves made of other materials, for example nitrile, which is a healthier opinion. When Swedish Testfakta tested 14 different vinyl gloves, 11 of them contained high levels of DINP. One pair high levels of DEHP and the remaining two pairs contained low levels of phthalates. The phthalates DEHP is since January 2007 banned in all toys and childcare products in a concentration above 0.1 percent. It is then classified as toxic to reproduction. But the preschool staff use vinyl gloves with DEHP when changing diapers or cooking for kids, there are no restrictions. Japan banned vinyl gloves in the food industry in 2000 when research showed a clear link between the levels of phthalates in packaged foods and the use of vinyl gloves.

DINP is also hormone-disrupting and banned in children’s products that can be placed in the mouth. In animal studies, DINP found to have a slightly smaller endocrine disrupting effect than DEHP and is therefore considered less dangerous… Many studies, however, suggest that DINP has adverse health effects. In a Norwegian study the researchers saw a clutch between DINP and increased risk of asthma.

Ironic that the gloves will protect against bacteria and chemicals, but they can give the user, in some cases, a high dose of endocrine disruptors. Gloves used in food production, the sushi counter, at preschools when changing the diapers and in the kitchen, and at home when we clean.